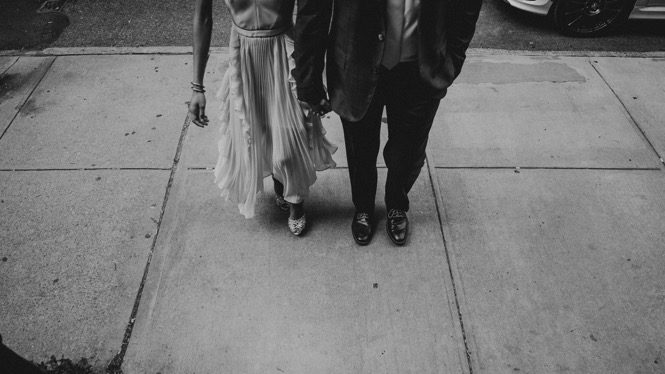 Nothing has tested my frugal super powers more than planning a wedding in New York City.

When I first sat down to estimate our wedding costs, I budgeted $1,000 for flowers. Haha, naive Luxe.

That’s the thing about weddings. You have no idea how much they cost, because most likely you’ve never planned one before. So when you sit down to do your budget, it’s basically like making up numbers.

But! As someone’s who’s gone through the trenches, today I wanted to show an example of what a wedding looks like in New York City, and exactly how much it cost. Three reasons why:

The vision was “laid-back yet luxurious un-wedding.” My husband was happy to let me use the wedding as a creative outlet, so I had fun looking at chic fashion events for inspiration. That meant the details mattered to me.

We wanted to spend no more than $15,000, which was less than 10% of our annual income. I would have loved to have a wedding at an iconic rooftop. We could have easily afforded it, but we wanted to be practical, while still staying true to our personal tastes. Don’t get me wrong: our wedding was important. But other things are important to me, too. Like saving up a bunch of money so I don’t have to work if I don’t want to.

A wedding should be approached with a strategy, like everything else. You pick the stuff you care about, spend on those, then cheap out on the rest. To get the “luxury” in New York City and keep our budget in line, there were two major strategies:

Things We Wouldn’t Do to Save Money

Not to say that you shouldn’t do these things, but these were our personal preferences.

*We did ask a distant friend to officiate and my friend to record the ceremony from her seat, though.

Alright, so let’s see how we did!

What We Splurged On

Our biggest splurge that basically DOUBLED the cost? Having it in New York City. This is something I refused to compromise on. Neither one of us is farm-y, religious, or feel particularly tied to our hometowns. Any place else wouldn’t have felt true to us. 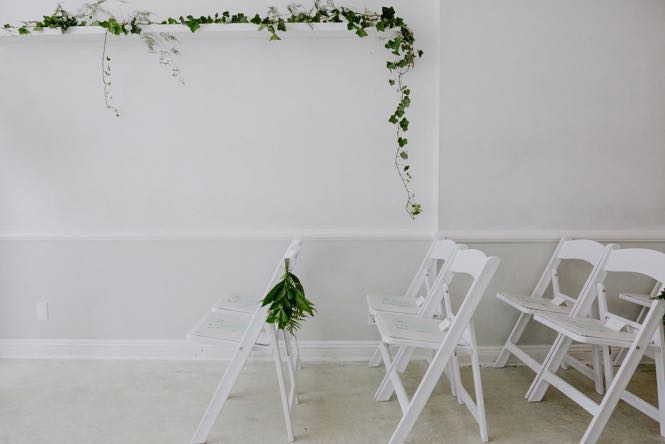 Photography was really important to both of us, and the right style was critical. I look really dumb when I try to pose for pictures, so we wanted someone who wouldn’t make us pose, but rather capture us naturally. I also wanted a style that was a little moodier and more cinematic. Something that looked more “real.” So we looked more for personality and style, rather than picking the cheapest option. To save money, instead of an all-day package, which would have cost $5-6,000, we picked an hourly rate instead. Our wedding was shorter than average, so no need to go with the full package. We also skipped engagement photos to save money, and I don’t think the wedding day photos suffered for it. 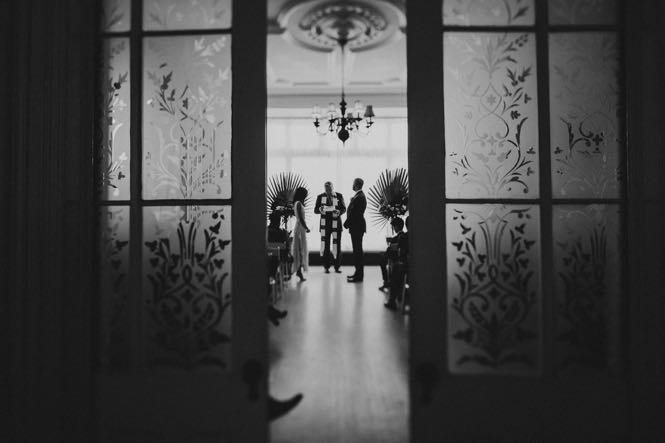 I contacted 17 florists. SEVENTEEN. Again, it wasn’t about the cheapest option. The flowers were important because we picked a blank canvas as our venue. If you have a naturally beautiful location, you don’t need flowers, but I wanted to create a look from scratch. I think tropical flowers and greenery are really dramatic, so I thought they could be used minimally but still add impact. 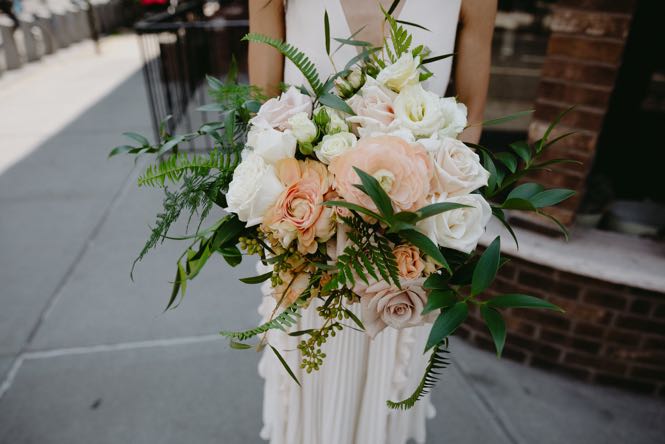 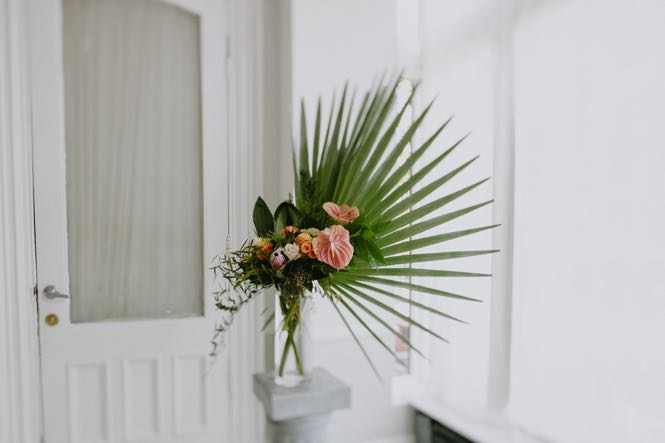 We didn’t have dancing, but we wanted to have our one, unique wedding-esque activity, so we hired an artist to paint portraits of our guests. We ended up paying twice as much because the first person we lined up fell through at the last minute. 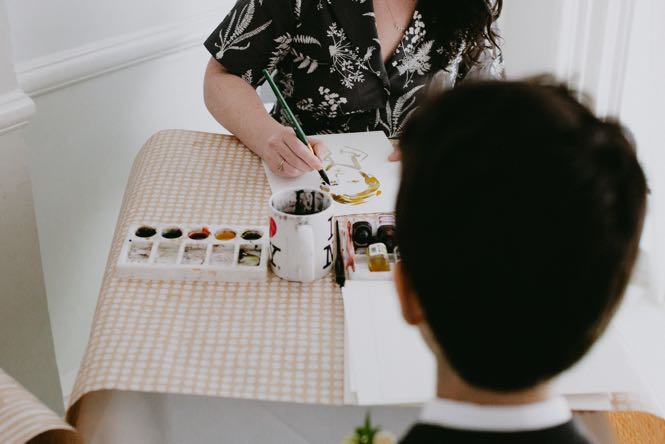 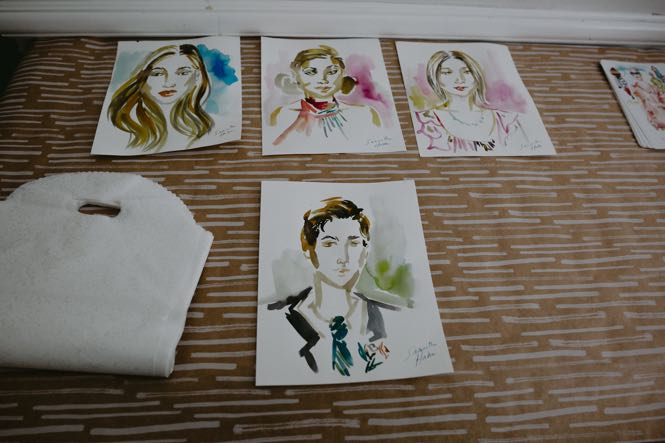 OK, this is the one splurge that was just for me. I didn’t want to wear a lot of makeup, so I was banking on the eyelash extensions to do most of the “prettifying.” And of course, I booked one of those “celebrity eyelash artists,” because if there’s one time to indulge, it’s your wedding day. I also wanted them to look really natural, so I figured a more expensive guy would do a better job with that.

What We Saved On

The ceremony and reception were in the same location and the fee was $350 for each. The venue was a homey restaurant in Brooklyn, housed in a lovely brownstone building. If you look at my Instagram feed, you know how much I love brownstones! 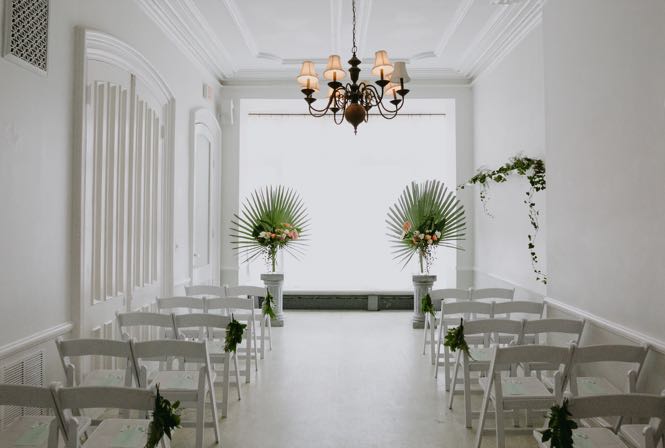 One hurdle we faced was food and drink minimums. The lowest minimum we could find for an evening wedding was $6,500. That meant we’d have to invite more people just to meet the minimum. Instead of trying to add more people, we decided to go with a daytime wedding, which fit our guest list way better. 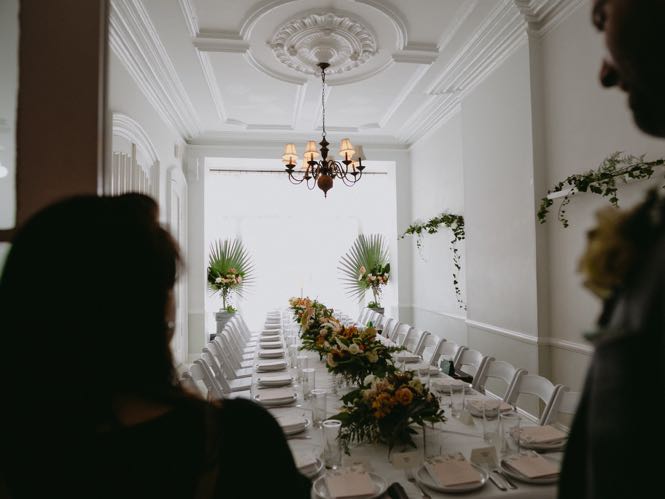 This was a cost that I was super practical about. Since I’m only wearing these clothes once, I didn’t see the need to go all out. In case you missed it, I got all my wedding outfits basically brand-new from eBay.

For the cake, taste was more important to us than how it looked. So we decided to not go for a traditional cake and just bought two cakes that I love from Lady M.

Best. Decision. Ever. The mille crepes cakes are comprised of 20 crepes with a thin layer of cream in between. So light and fluffy and delicious!

I was worried that the one tiered cakes would look kind of sad because we didn’t put a lot of money on the cake decor, but I think the florist did a good job making them look nice. 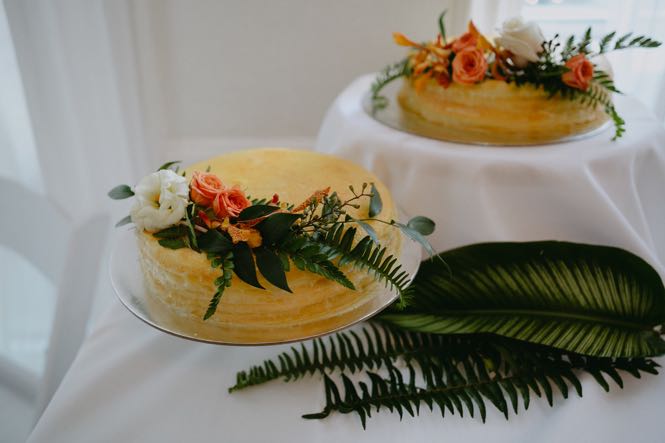 Later, the florist added more greenery and repurposed my bouquet to jazz up the cake table even more. Yay to resourcefulness. 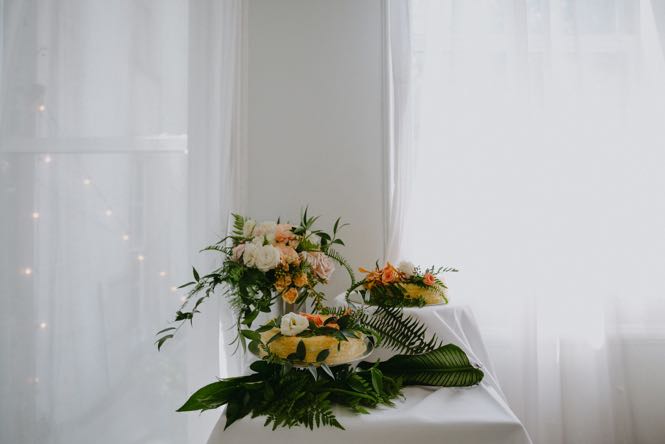 For hair and makeup, I didn’t want to look like a different person. I decided I’d do my own makeup, using what I already have and buying just a few things to fill the gaps. I bought foundation and a lipstick from Sephora, but I’m using them in my day-to-day life so I don’t count those as wedding costs. For hair, if I did it myself, I would have had to spend money on tools I’d only use once or twice. This was something I felt I needed a professional for. So I used a promo code and booked a Glamsquad stylist to come to my house. Instead of picking a bridal look, which would have cost more, I picked a regular style since I only needed waves. Then the makeup artist got super lost the day of so they bumped the cost down to just $10 instead of $25.

My husband had an old work friend who was ordained, so we saved about $5-$600 this way.

The first was the day-of coordinator, who we found from Thumbtack (searched for ‘wedding coordinator’). We negotiated the cost down $600 since our wedding was small, had fewer things to coordinate, and we were really organized already. At first I questioned whether or not this was needed because our wedding was so small. Plus, we planned everything ourselves and since I’m a natural planner, I did the day-of timeline, put together all the floor plans, etc. However, our coordinator was awesome and if she wasn’t there, I would have been worrying about all these details on the day of instead of being present at my own wedding. 10/10 would recommend.

The second best thing we did was give my friend an iPhone to record the ceremony and various bits throughout the day. Having some video was really important to me, but I didn’t think a professional was worth it, so we put my friend in the second row so she could tape the ceremony from her seat. The footage isn’t perfect, but it didn’t have to be. Seeing people move and talk is so much different than a static photo, and I’m so happy we were able to capture some moments.

The officiant. He cost $0, but he didn’t write anything for the ceremony and showed up with 20 wrinkled papers that had nothing to do with our wedding. I totally would have paid $600 to have an officiant who actually showed up and did was he was supposed to.

1. Focus on the Big Wins

You don’t have to pinch pennies on every single category. Focusing on a few of the big-ticket items is more efficient, and then you don’t have to compromise on every little thing. For example, just by not buying an engagement ring, that gave us $3,000 to use on something else.

Major lesson learned here: If you want vendors who are at the top of their game and forward-thinking, you’re gonna have to pony up the money. For example, all of the creative, magazine-worthy florists I loved cost $4,000 MINIMUM. I had to go through so many florists to find one that got my style and was reasonable. The same thing with the photographer.

3. Investing Is My Best Friend

I fronted most of our wedding because I was scheming to earn more credit card points. I remember writing an e-mail to my friend saying how scared I was to see how the wedding would affect my net worth. But look, my net worth still increased while I was paying for the wedding. 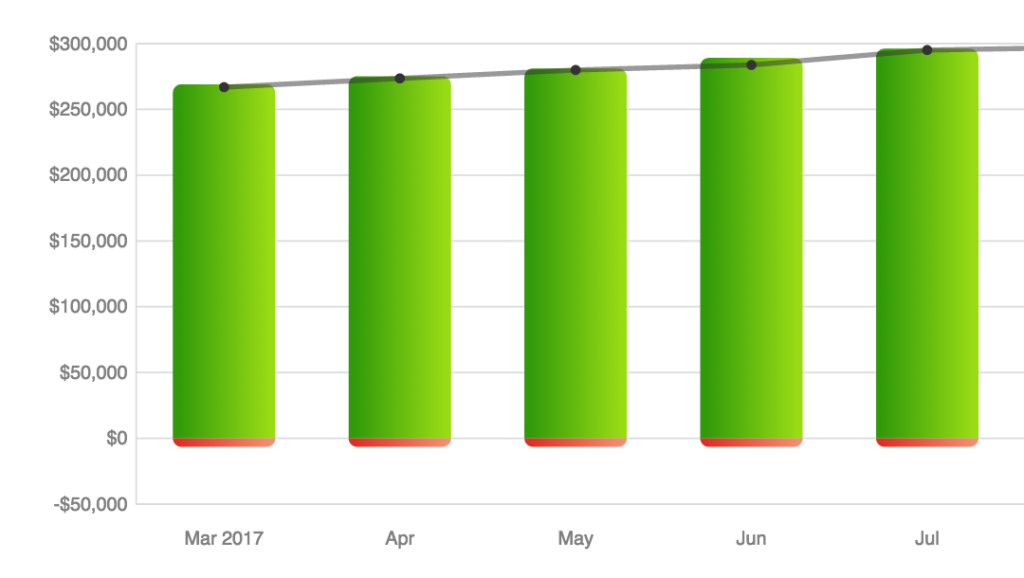 How could that be? Investing, my friends. It’s the only way I know of to make money without actively doing anything.

What about you? Wedding priorities are insanely interesting to me, so what were your top splurges? What surprised you the most when planning your wedding? 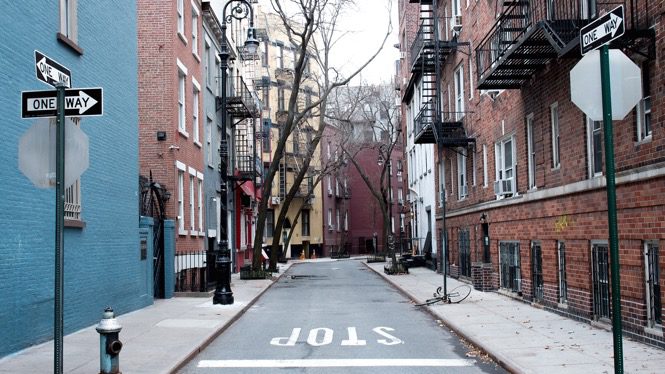 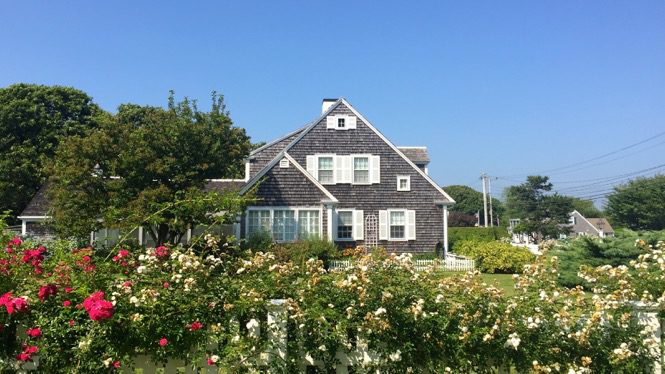 Questioning the American Dream: Why I’m Not Obsessed with Buying a House 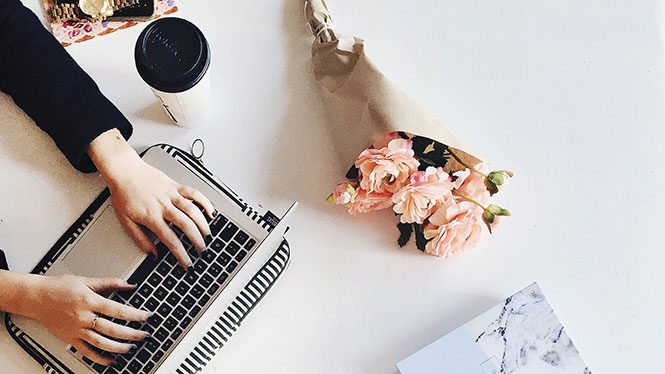